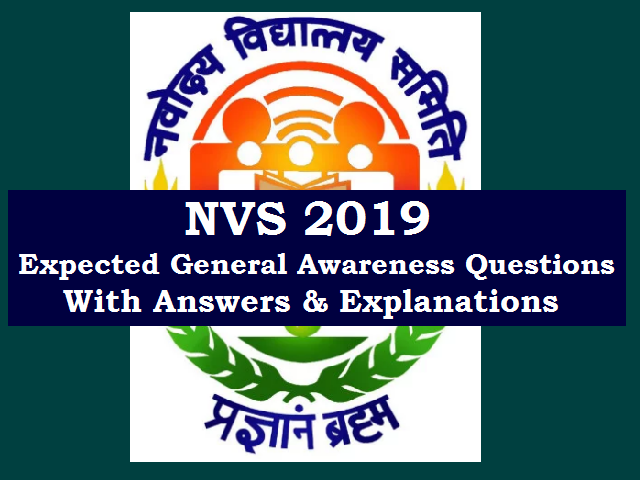 Navodaya Vidyalaya Samiti (NVS) releases the exam dates and schedule of the Computer Based Test (CBT) to be conducted for recruitment of the PGT, TGT, Assistant Commissioners, Lower Division Clerk, Legal Assistant, Female Staff Nurse, and Catering Assistant in the Jawahar Navodaya Vidyalaya (JNV), NVS HQ and Regional Offices. As per the schedule, the NVS 2019 examinations will begin from 16th September and will continue till 20th September 2019. Check here the complete exam schedule and dates of the NVS Recruitment 2019 along with the NVS Admit Card download process and expected General Awareness (GA) questions for NVS PGT, TGT, MISC post examinations.

Navodaya Vidyalaya Samiti will conduct the examination to all the vacant posts in different shifts and days. Initially, the Samiti will hold the online examination for the post of Lower Division Clerk (LDC) JNV Cadre on 16 September in three shifts. The timings of the exam will be communicated to the candidates through the NVS admit card, which is expected to be released soon. Have a look at all the details related to NVS Admit Card or Hall Ticket below.

Exam Schedule: Have a look at the exam schedule of the NVS 2019 Examinations:

In every NVS recruitment examination, the Samiti asks around 15 to 25 questions from the General Awareness section. This General Awareness section is a part of exam structure of NVS Computer Based Test for all the posts 0 TGT/PGT Teachers (Art Teacher, Music Teacher, Librarian, PET – Male & Female), Assistant Commissioners, Lower Division Clerk, Legal Assistant, Female Staff Nurse, and Catering Assistant. Have a look at the most important General Awareness Questions that are highly expected in NVS 2019 Exam:

India observed August 8, 2019, as the 77th anniversary of which freedom movement?

Explanation: India observed the 77th anniversary of the Quit India movement on August 8, 2019. The Movement, also known as August Kranti Diwas, began in 1942 with Mahatma Gandhi’s clarion call of “Do or Die” to end the British rule in India.

Article 370 of the Indian Constitution belongs to which Indian State?

b) Jammu and Kashmir

Answer: b) Jammu and Kashmir

Explanation: Article 370 of Part XXI of the Indian constitution grants special status to Jammu and Kashmir. The Article has been scrapped by the Central Government recently. With the scrapping of Article 370, Jammu & Kashmir will now no longer have its separate constitution, separate flag and Special status. The State has now been declared as a Union Territory with the legislature.

The United Arab Emirates (UAE) conferred its highest civilian award ‘Order of Zayed’ or Zayed Medal on PM Narendra Modi in recognition of his “pivotal role” in strengthening ties between the two nations. The honour was bestowed upon PM Modi by UAE Crown Prince Mohamed bin Zayed Al Nahyan on August 24, 2019.

India launched the Chandrayaan-2 Mission from which of the following places?

Explanation: Chandrayaan-2 was launched on 22 July 2019 from Satish Dhawan Space Center, Sriharikota. India’s second mission to Moon, Chandrayaan-2 consists of an orbiter that will observe the surface of the Moon and become a source of communication between Earth and the Moon mission.

What is the Capital of Brazil?

Explanation: The Capital of Brazil is Brasília, since its construction in 1960. Prior to that, Rio de Janeiro was the capital of Brazil between 1763 and 1960. The country was recently in the news as Brazil’s Amazon rainforest, which contributes about 20 per cent of the earth’s oxygen, has been burning at the highest rate ever. In 2019, there have been around 72,843 fires in Brazil itself.

Which of the following books was authored by father of the nation, Mahatma Gandhi?

b) Victory of India

Which incident took place in the year 1919 in the history of Indian freedom struggle?

Explanation: Jallianwala Bagh massacre took place in April 1919 when the British Indian Army troops under the command of Acting Brigadier-General Reginald Dyer fired bullets into unarmed Indian civilians who had gathered in Jallianwala Bagh, Amritsar for a public meeting. The Year 2019 marks 100 years of the Jallianwala Bagh Massacre.

Explanation: Wi-Fi is known as ‘Wireless Fidelity’, the local area wireless technology. It allows the device’s connection to the internet using the ISM radio bands. It is used as a brand name for products using the IEEE 802.11 standards.